How Cold is Cold?

Pick Plants that Can Withstand the Rigors of Winter

First and foremost, mention the 'rigors of winter' and gardeners all think about their 'hardiness zone', a term that connotes how cold it gets where they live and whether their plants can withstand it.

At the drop of a hat, we gardeners love to quote our zones. Recently out, there is now the new hardiness map from the USDA, so you can check your zone with great precision. I have more about how to use the new USDA website on the following page.

But this one number---your zone--- does not tell the whole story by any means. Plenty of other factors influence plant survival.

What does Plant Hardiness Zone mean?

Your hardiness zone describes the coldest temperature you can expect where you live. 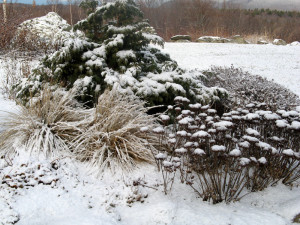 A collection of hardy plants in my Zone 4B garden

For instance, where I live on the western slopes of Vermont's Green Mountains.  Although for much of the winter our temperatures remain above 0°F  usually, for a few nights each January, the temperature will drop below -20°F, which for many of my plants is seriously cold.

This means I live in USDA Zone 4B---a designation that includes all the places where, over the course of an average winter, the thermometer  occasionally dips to between -20°F  and -25°F.

By contrast, places that fall within Zone 4A can expect minimum temperatures closer to -30°F.

But there are a few other things to remember:

We are using history to predict the future.

Every year weather stations across the country report the minimum temperature they experienced.

Hardiness zones are based the average minimum temperatures

Furthermore, if a particular plant variety is rated as 'hardy to Zone 4', researchers have demonstrated that it will survive---and hopefully flourish--- in places where the temperatures actually do drop into the minus twenties. Thus, when I go plant shopping, I need to choose plants rated for Zone 4 or lower.

So how useful are plant hardiness zones?

Gardeners tend to quote their Hardiness Zone as if it was an immutable, never-changing number. But as we have see, Hardiness Zones are derived from historical data, and who knows what is in store for us over the next ten and twenty years?  We are using history to predict the future, which of course introduces considerable uncertainty, especially as we anticipate a different future overshadowed by global climate change. 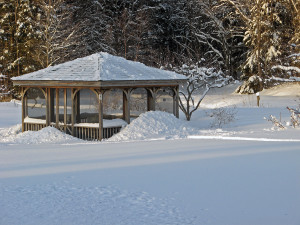 This leads to the idea of an 'outlier year', when the minimum temperature falls far from the average. For instance:

When Dick and I first moved to Vermont,  I remember that, for a few cold nights every winter, the temperature at our house would predictably drop into the 'minus twenties'. But in recent years our winters have been less cold.

That is...until January 2011...when an arctic air mass swept down over New England, and for a couple of nights temperatures all across Vermont reached record-breaking lows of between  -25°F and -35°F!   This was followed by blizzards which blanketed the country from Chicago to Boston, leaving excessive snow in cities and countryside alike.  Certainly the winter of 2011 involved a lot of roof-raking---not as an upper body exercise, but to pull the excess snow off the roof to avoid a sudden building collapse.

By contrast in January 2012 we have had almost no snow and the temperature has dropped to -10 °F on just one night.

Could this be the way of the future?  Climate change appears to be ushering in an era of overall warming, along with new temperature extremes, both hot and cold, as well as dramatic changes in the amount of precipitation (whether rain or snow) experienced in a given season and place.

Hardiness Zones are just part of the story.  Even through we 'know our zone' there are lots of other factors that affect plant survival, covered briefly in Beyond the Zone.