A destination to please everybody 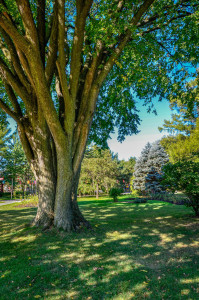 We Vermonters are so lucky! Just one hour from our northern border we can experience the world-renowned Montreal Botanical Gardens, a vast parkland in the heart of a major city.

From the three Cultural Gardens to numerous specialty display gardens, plus a hundred acre arboretum (home to almost every species of tree capable of growing in Montreal’s climate), this vast 190 acre complex offers delightful and varied experiences for everyone.

Here are some of my favorites:

At the entrance to the gardens we were greeted by the majestic ‘Lion de la Feuillée’, a huge cast-iron sculpture of a noble lion reposing with his fore feet stretched out in front of him.

Back in 1831 a well-known architect, René Dardel created four identical lions to guard the main bridge into the City of Lyon in France. Then in 1992, to mark the 350th anniversary the City of Montreal, the people of Lyon presented one of their lions to the citizens of Montreal.

Next we strolled through the colorful rose garden which, like everything else, is on a bountiful scale. There are 100 beautifully maintained beds and 900 varieties of roses all displayed to perfection—and not a weed in sight!!

Perhaps fittingly, the three unique Cultural Gardens—Japanese, Chinese, and First Nations— each comprising over six acres, are situated at the epicenter of the entire complex. 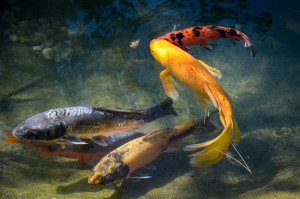 We spent many hours strolling through the Japanese garden, a place of peace and tranquility where one can retreat from the hustle of everyday life. 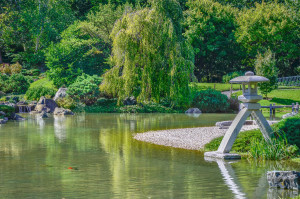 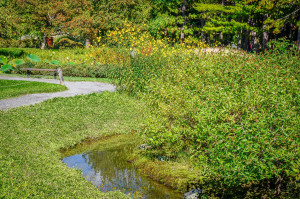 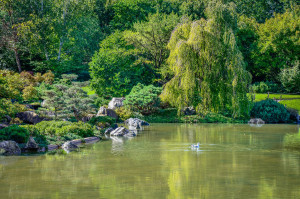 It runs the gamut, from grand sweeping spaces to cascading waterfalls and still ponds.  Every tree, shrub and stone in the Japanese garden has been carefully positioned to contribute to the feeling of harmony.

Be sure to go through the pavilion, a secluded quiet space that also contains a wonderful collection of ancient bonsai. 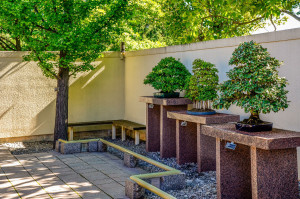 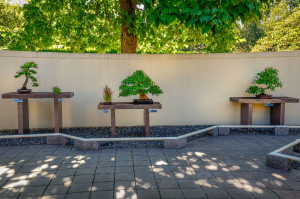 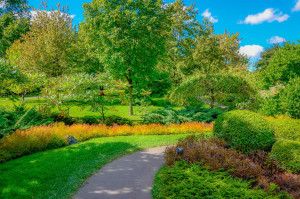 Many of the paths in the Japanese Garden are lined with grasses that sway gently in the breeze, while numerous rhododendrons, azaleas, crab apples and pine trees provide structure and height. 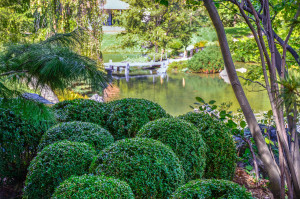 And, as an observant gardener, I marveled at the painstaking manner in which each plant had been pruned to perfection.

Again everything in the Chinese Garden is meticulously laid out, with many narrow winding paths that take the visitor through green woods and alongside gentle waterways and ponds brimming with exotic lotus plants. 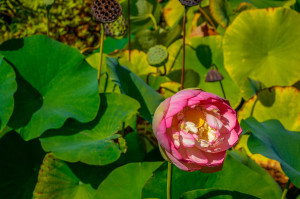 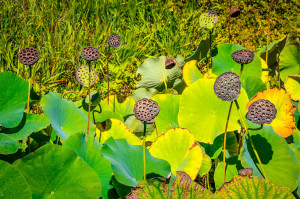 But, by design, the Chinese Garden is also a place of contrasts. The large pavilion, with a wide up-curving roof in the traditional Chinese style, bustles with people. 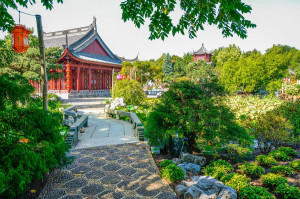 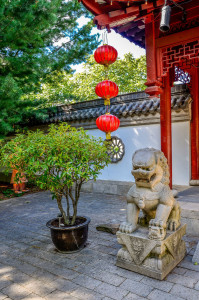 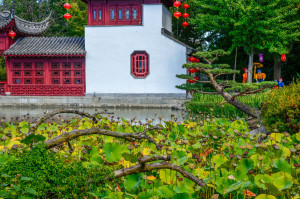 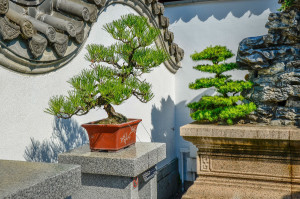 In the Chinese Pavilion you can also contemplate a fascinating bonsai collection, with each miniature plant representing years of painstaking shaping and pruning to achieve the look of a windswept gnarled tree.

We were lucky enough to visit in September, when the Chinese garden was all decked out with specially crafted colorful lanterns to celebrate the coming of fall. Today this ‘Garden of Lights’ festival has become an annual event, and includes the Japanese garden as well. 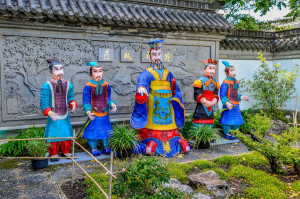 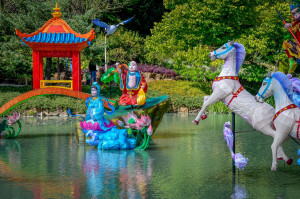 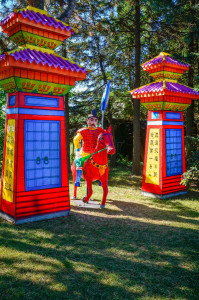 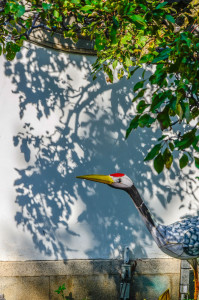 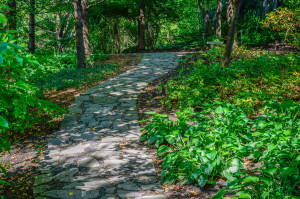 The Garden of the First Nations

The third Cultural Garden, that of the First Nations, sits between the Chinese and Japanese gardens. It was created as a tribute to the earliest inhabitants of North America and to their contemporary descendants. Here, from the information supplied on numerous display boards, you can learn about their culture, traditions and agricultural practices.

The First Nations Garden also boasts over three hundred different species of native trees, shrubs and grasses, something with particular appeal to horticulturists.

As befits a major botanical garden, there are also numerous specialty gardens where you can see many types plants that you might like to try in your own garden back home. There are specific areas devoted to perennials, annuals, plants for shade, shrubs of all kinds, vegetables and other ‘economic plants’, as well as medicinal and healing plants. 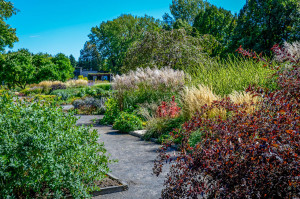 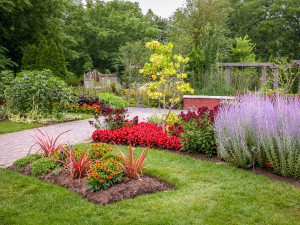 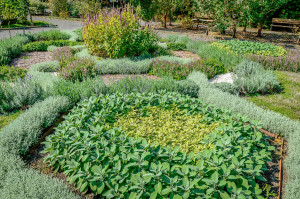 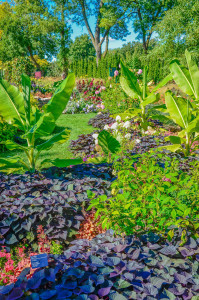 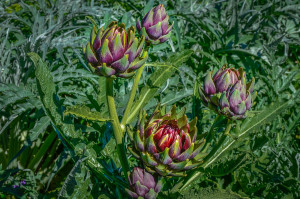 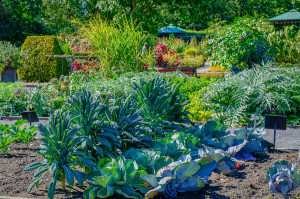 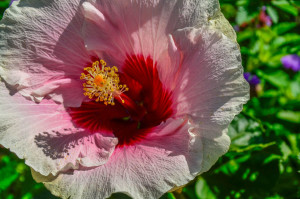 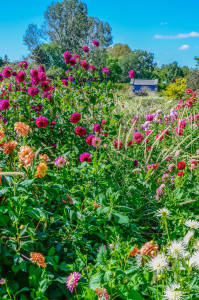 Many of these are set out in large rectilinear beds in the long space that runs the entire southwest side of the complex— of interest to the home gardener, but perhaps less so for other visitors.

There are also several display gardens where the plants are grown in a more naturalistic setting that I found more conducive for strolling around on a hot summer’s day, including the delightful Flowery Brook, the new Alpine Garden, as well as the Rose Garden which we saw upon our arrival.

A green oasis in the snow

And, should you happen to find yourself in Montreal in midwinter, why not plan a delightful afternoon in the warmth of the huge greenhouse complex that mimics various ecosystems of the world and the plants that grow in them. Here you can wander through a lush rainforest and an arid desert, and see amazing collections of ferns, begonias and flowering orchids. 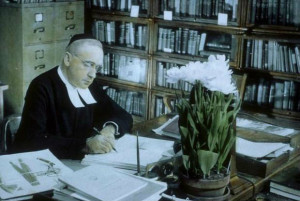 The genesis of these gardens can be traced back to a single man, Brother Marie-Victorin (a member of the Christian Schools religious order) who was both a visionary teacher and also a trained horticulturist.

Brother Victorin dreamed of creating a monumental new public garden where the people of Montreal could enjoy fresh air, sunshine and the natural world. And indeed, to this day, citizens of Montreal can use the gardens free of charge.

In 1929 Brother Victorin unveiled his ideas to an audience that included Camillien Houde, one of his former students who was by then the city’s influential mayor. Houde was captivated by the concept and for the next two year worked tirelessly to gain political support for what, at the height of the depression, must have felt like a pipe dream. It always helps to have friends in high places!!

Ground-breaking began in 1931, only to cease a year later when Houde was ousted as mayor. In 1936 he regained his office and work began on the gardens once more. This time Brother Victorin was appointed as Director, and he in turn persuaded an award-winning landscape architect, Heinrich Teuscher, to serve as Chief Horticulturist.

Teuscher created a comprehensive landscape design and was able to hire over 2000 workers to work on his plan. Within two years they had completed both the main building and the extensive greenhouses.

Soon Houde was back out of office once more and World War II demanded all available resources.

Then, in 1947 Bother Victorin was killed in a car crash. And without a champion, there was a thirty year hiatus before work resumed on the gardens. The arboretum was designed and planted in1970, followed with the rose garden in 1976.

The Japanese garden was created in 1988, the Chinese garden in 1991, and finally the First Nations Garden opened in 2001.

Today the Montreal Botanical Gardens, which began as the dream of a single man, stands as one of the great gardens of the world.

One Response to “The legendary Montreal Botanical Gardens”

Spend a day at these world-renowned gardens