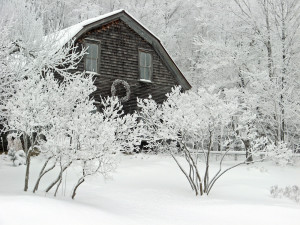 Old lilacs form a natural line in front of the barn

Do you live where, for several weeks---or maybe even months--- each winter, your garden is hidden under a deep blanket of  snow?  Then you need to think about using BIG garden elements which, come January and February, will not vanish from view.

I am talking about LARGE structures like a barn; a gazebo; an arbor; a trellis or high fence, as well as trees and groups of good sized shrubs that will truly  ‘show in the snow’.

Your role is to use 'show-in-the-snow' garden elements to accentuate your garden's natural skeleton and create beautiful winter pictures.

The garden's skeleton comes alive in the winter

The photograph above shows our old barn (built back in the 1930s, one of several farm barns on the property at that time).  A path, invisible under the January snow,  cuts diagonally across the barn slope, leading to our fenced-in vegetable garden to the right of the barn.

Lower down the slope several unkempt lilacs grew in a rough line along the top of the boulder wall.  Over the years I have gradually thinned out all the dead and older wood from the lilacs to encourage flowering.  At the same time...as you can see with this particular pair of lilacs that arch over the path,...I removed most of the lower branches: i.e. pruned them up--both to create a partial view of the slope above, and for winter appeal.

All sizable structures, like a gazebo or an arbor, a fence or a trellis, when strategically positioned, serve to accentuate the underlying skeleton of the garden at any time of year.  But they are SO much more apparent in winter.

Garden structures are usually fabricated from wood, but wrought iron brings an entirely different look, and both have their place in the winter garden.

Wooden structures for mass and heft 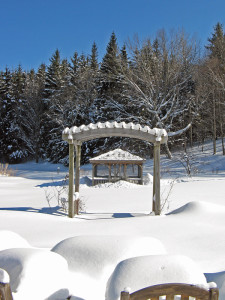 The gazebo and arbor define the garden's axis

As wooden structures are inherently massive, they are the most appropriate where you want something to stand out at a distance.

We have already seen how this pairing of a gazebo and an arbor, perfectly lined up with each other, anchor the diagonal axis in my garden. The snow pillows on the patio chairs add a touch of whimsy.

Using wood for both the gazebo and the arbor defines them as a pair.  Also, it is interesting to note that, although the gazebo is about 60 feet away from the arch, it is still quite visible. 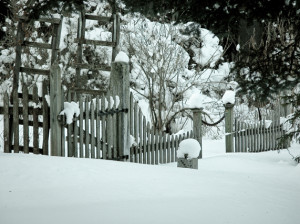 And fences can be more than just property boundaries!  A fence can also subtly signal the transition between one part of the garden and another.

See how the owners of Standing Stone Perennial Gardens, in South Royalton, VT  have marked the boundary between two distinct areas in their large garden with this snow-covered rustic gate and picket sections.

Ironwork for contrast and delicacy

I love the way black ironwork stands out against the snow, making it the perfect material to add interest to the winter garden, but without the heaviness of wood. 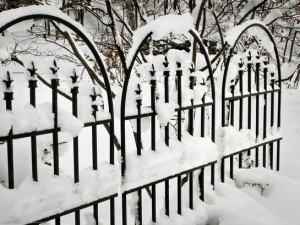 Here I used a set of free-standing wrought iron trellises to delineate the edge of the back garden.

I wanted to create a visual separation of the 'real garden' from the more utilitarian functions that go on along behind the house. But at the same time I did not want a heavy barrier that would interfere with the view of the garden from our kitchen window. So ironwork was the perfect solution. 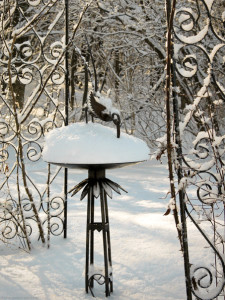 An iron bird sipping snow in his birdbath

I also wanted an imposing, but not heavy-looking centerpiece for an oval bed near the front of the house. When I saw this three dimensional rose arbor made of iron I knew it would answer my need.

On each of its four sides I planted a William Baffin rose which has vibrant pink flowers, along with a contrasting-colored clematis. Thus in summer the center of the arbor is virtually hidden.

So in winter it is a surprise to see this persistent iron bird in his birdbath, sipping at the snow, at the center of the space. 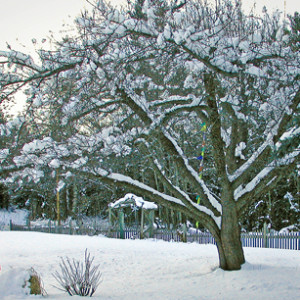 This beautifully pruned tree grows in the middle of a lawn at Standing Stone Perennial Gardens in Royalton, Vermont.

Over time internal and crossing branches have been carefully removed to reveal the tree's outwardly-thrusting shape, while around its periphery, the smaller flowering branches receive abundant light.  I have never seen it in bloom, but I can only imagine that it is an amazing sight.

But it is also stunning in winter, as new snow outlines the shape of each and every branch, both large and small.

Shaping a beautiful tree like this involves regular, gentle pruning throughout its formative years, a labor of love that requires both time and skill.  But the result is spectacular, and will remain so for many years to come. 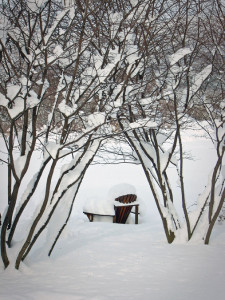 A pair of Amelanchier canadensis in winter

A duo of serviceberries

The Shadblow Serviceberry (Amelanchier canadensis) is a small multi-stemmed  tree which grows to about 12 feet high.  Around here in early May the white blossoms of the serviceberries, both in the woods and in our gardens,  announce the arrival of spring.

Unfortunately serviceberries have an annoying tendency to leave messy-looking dead twigs in the interior of the branches. But take a little time in spring to prune them off, and the following winter you will be rewarded with a sculptural silhouette of branching stems against a backdrop of snow.

Again I pruned this pair 'up,' to show the garden beyond. 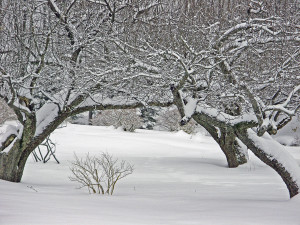 A troika of apple trees

Trios of trees are always interesting.  These three old apple trees at Blueberry Hill, in Goshen VT, appear to be deep in conversation.

And again it is pruning that creates the winter picture.

A single shrub sitting in the snow all by itself looks lonesome and forlorn.  But a group of shrubs planted together makes a statement. 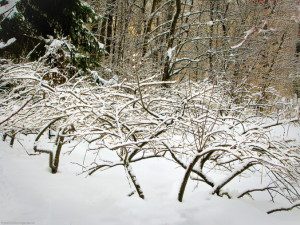 A row of winterberries still 'show in the snow' even after the birds have eaten the fruit.

I wanted to accentuate the edge of the space where we park our cars, so I planted a total of six winterberries...Ilex verticillata... around two sides of the back corner.  In the early part of the winter these bushes have lovely red fruit,  but by the time this picture was taken the berries had become food for birds.  But the shrubs still do a nice job of outlining the corner of our parking area. 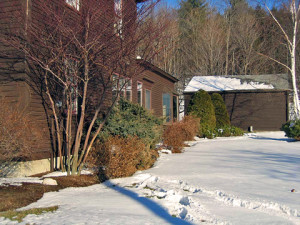 At Warren and Lorraine Kimble previous home, in Brandon VT, the shrubs along a south facing wall provides both contrasting shapes and textures: conical green arborvitae and jagged blue-green junipers; separated branches and trunks of a small tree; and dense compact mounds of azaleas and spireas. 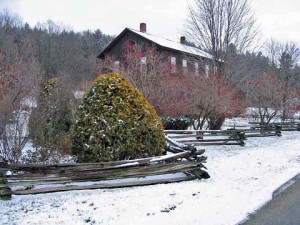 In another part of this same garden a large golden arborvitae stands out against a group of American cranberry bush (Viburnum trilobum), red with fruit.

Unfortunately our native American cranberry bush is susceptible to the viburnum leaf-beetle.  However, in addition having large, pure-white flowers in spring, its attractive red fruit is also a great food source for birds in the winter.  So, for these reasons I recommend risking an infestation and experimenting with a few bushes. 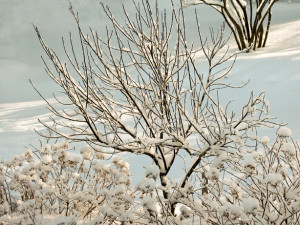 Purpleleaf Sandcherry with a lower growing spirea in front

The main reason people plant Purpleleaf Sandcherries --Prunus cistena-- is for their striking purple-red leaves and pretty pale pink flowers in spring. I am no exception, and I have had several in the garden for about 10 years ago now.

But while I love the Sandcherry's leaf color I dislike its legginess. So I added a pair of yellow-leaved spireas (of uncertain origin) around the base of this one, not only to set off the Sandcherry's purple leaves, but also to cover its bare legs. 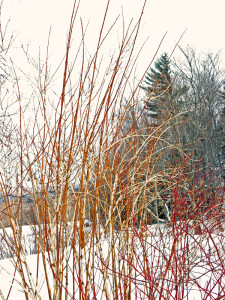 And even the bare branches of deciduous shrubs can provide winter color.

Some years back I planted a long meandering line of mixed shrubs to create a backdrop for my big perennial bed.

This picture shows the center group, which is comprised of three Ninebark---Physocarpus 'Diablo', (which have finished up about 10 feet tall) and four Red-twigged dogwood---Cornus alba 'Ivory Halo',  (which reach six feet tall) in their winter dress.

I initially chose the Diablo ninebark for the color of its leaves. They are a deep bronze color and they really stand out against the pervasive green of summer. Then to make a dramatic color contrast with the ninebark, I picked the Cornus 'Ivory Halo', for their cream and green variegated leaves.

(And I also decided to use the Siberian dogwood,  Cornus alba, which is less likely to spread in an uncontrolled manner than its relative, the native redosier dogwood, Cornus sericea.)

But again, it was the winter effect which was the unanticipated bonus.

It turns out that Physocarpus 'Diablo' also has a lovely two-toned exfoliating bark, normally only noticeable after the leaves have fallen. Its outer surface is an attractive reddish-brown, but the it peels back in sections to reveal a soft yellow, almost parchment-like color inner layer.

Of course all red-twigged dogwoods are known for their winter color. And while the Siberian dogwoods do not offer the brightest red, that is a trade-off I am willing to make for a less aggressive habit.

In winter the view from our bedroom window is totally unimpeded by other plants. So it is pure pleasure, as I sip my morning coffee, to look out across the white lawn and see the ninebark and the dogwoods highlighted by the early sun.