The landscape is by no means devoid of color in winter, but it comes in smaller packages.

So adding color to our winter gardens is a bit like putting decorations on the Christmas tree--- we seek eye-catching highlights that will stand out against a quiet background. 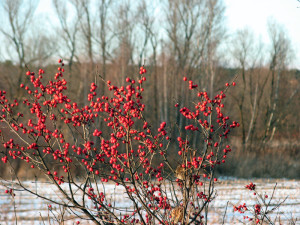 Wild winterberries along the road near Brandon, Vermont (December 2009)

Red in the Winter Landscape

There is actually more red around in winter than you might guess, both fruit and stems. When walking or driving along New England's country roads you may spot a mass of Winterberries, (Ilex verticillata) or an isolated American Cranberry Bush (Viburnum trilobum) , both good sources of food for birds, or perhaps a stand of Redosier Dogwoods (Cornus sericea) colonizing a ditch.

These and other reds easily translate to our gardens. And whether wild or tamed, small splashes of red always look stunning in the snow.  Here are some of the colored accents I enjoy in my Vermont winter garden.

When one mentions red and winter in the same breath,  the Red-twigged Shrub Dogwoods immediately spring to mind.  Shrub dogwoods are outstanding plants for cold climate gardens, with their familiar red stems piercing the snow and, often, with attractive variegated leaves in summer.

Our native Redosier Dogwood, Cornus sericea (sometimes called Cornus stolonifera), as well as its cultivars, like the red 'Cardinal' and the yellow 'Flaviramea', spreads by underground stems (or stolons) which means they can get out of bounds in the garden border.  But in a naturalized setting or in situations where soil stabilization is needed, they can be extremely useful. 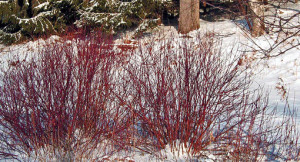 Although they are non-native (coming from Siberia and Manchuria), I favor cultivars of the Tatarian Dogwood, Cornus alba, for the garden, which they are much less likely to engulf other plants.   C.a. ‘Ivory Halo’ is a little smaller than the species. It has variegated leaves in summer and deep red stems in winter and a group of three, planted about five feet apart in a triangle, makes a nice year-round backdrop in a mixed border.

However red-twigged dogwoods are not entirely maintenance free.  Older stems eventually lose their red color and clutter the middle of the shrub, which prevents the new colorful young stems from sprouting.

So once a year take a little time to prune away any the stems that are three years or older. These are the ones that look mottled or show signs of die-back.  Always remove the entire stem, making your cut as close to the ground as possible at the base of the shrub.  I enjoy doing this chore in early November. With the leaves gone I can see the entire interior of the shrub and the condition of all the stems, and it is a very pleasant task at a time when there is little else in the garden demanding my attention. 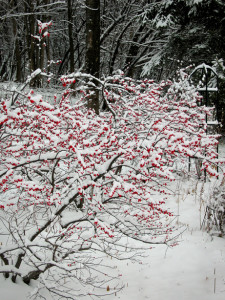 A holiday treat: snow adds a finishing touch to the bright red fruit on our winterberry bushes

It goes without saying that all red fruit looks lovely against the wintery landscape. And winterberries produce some of the brightest reds around.

Winterberries (Ilex verticillata) are a deciduous holly which is native to eastern and central North America; around here you find stands of them populating damp spots near road culverts or at the corners of fields.

Winterberries are also an excellent source of food for birds. So plant a group of winterberries in your garden and you will be assured of some interesting wild visitors.

Of course I really resent the late season visitation of the robins. It seems that, about one year in four, a gregarious flock of robins, preparing for their migration south, settles into the garden for a fortnight in November.  First they feast on the worms that still remain just below the surface of the lawn. Then they proceed to completely strip bare the half-dozen winterberry bushes we have planted around the back corner of our driveway.

Barring plunder by the robins, our winterberry bushes will be decked in red throughout the darkest months of winter.  And it is an unmitigated delight to see them laden with fruit after a fresh fall of snow.

Eventually, with repeated freezing and thawing, the fruit will blacken.  So when the pine grosbeaks visit in March, I certainly do not begrudge them a feast from these same bushes.

Winterberries, like all Ilex species,  are dioecious, which means the male and female flowers are borne on separate plants.  So, to achieve pollination and subsequent berry production in any holly, a group of female shrubs requires a male counterpart somewhere in the vicinity.

And furthermore, you need a 'compatible male' variety, one that flowers at the same time as the females.  When you buy a berry-producing winterberry variety, which will be a female, ask which is 'the right male'. One compatible male will pollinate about six to ten females.

For example, my 'Winter Red' bushes are a late-flowering variety, and they need 'Southern Gentleman' as a nearby pollinator.  But my smaller growing 'Red Sprite' cultivars flower a little earlier, and  'Jim Dandy' is their pollinator. 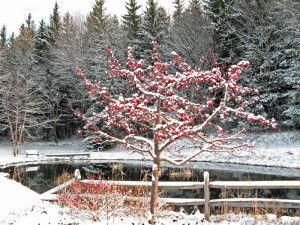 In springtime our small Snowdrift crab apple has lovely white flowers; and in winter its luscious fruit draws interesting wild visitors to the garden

Some varieties of crab apple maintain their fruit well into the winter months, both adding to the outdoor scene as well as providing sustenance for wild creatures.

Donald Wyman, and its smaller growing counterpart, Red Jewel, (Malus ‘Donald Wyman’ and Malus 'Red Jewel') are excellent all-round varieties for the home garden.  They are easy to train into shapely trees and their fruit usually stays red all winter long.  I planted Donald Wyman near our kitchen window.  I enjoy the sight of its fruit in the winter months, and when the pine grosbeaks stop by in March, I am happy for them to make a feast. 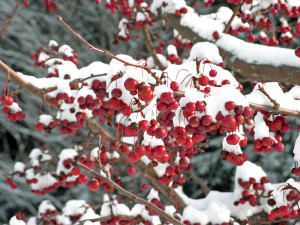 Down by our pond there is another small crab apple, Malus ‘Snowdrift’ that apparently has big and truly luscious red fruit.  One year for a full two weeks in February, a flock of  wild turkeys came by daily to eat their fill. We were fascinated to watch them teeter on the outer branches and  S-T-R-E-T-C-H out their necks to reach every last morsel.

However not all crab apples provide winter bounty.  We also have a pair of Liset crab apples behind the gazebo. They are lovely shapely trees which in late May and early June are completely covered in deep pink blossoms, in July giving way to small dark-colored fruit.  However either the fruit shrivels on the tree or becomes a summer meal for the cedar waxwings...no winter color from these trees.

At the back of the reference book: Landscape Plants for Vermont you can find a listing of hardy crab apple varieties for New England gardens, including those with the best fruit retention for winter.

Rosehips are Red and the Hills are Blue

Rosehips are another source of winter RED. Rugosa rose cultivars, especially the Canadian-bred "Explorer Series' are certainly among the stalwarts our cold-climate gardens. And most rugosa derivatives have nice showy hips. They are usually red at the start of winter,  eventually turning black.

And there are also two species roses that deserve mention.   Rosa glauca comes to us from Europe. It has small, almost inconsequential flowers, but lovely bluish colored leaves and lovely hips from August into the first few months of winter. 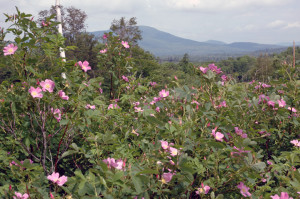 The wild rose, Roasa virginiana, in the hedgerow behind our garden

But in my mind the prize goes to our native Rosa virginiana.  When Dick and I first started making our Vermont garden, back in 1995, some Rosa virginiana bushes were growing as volunteers in the rough area that separates the lawn from the road.  Over the years we have gently ‘encouraged’ them by cutting away some of the competition, and they have rewarded us by spreading in to make a long wild hedgerow.  And it turns out that the hedgerow is the ideal spot for them...they would be too aggressive in the border.

And every year, for a few brief days in June, our naturalized hedgerow is covered in single pink flowers, making an unforgettable backdrop to the garden. 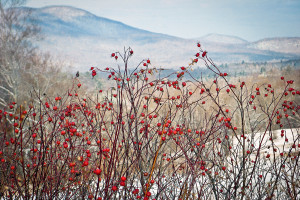 And, in its own way, in the fall and winter the hedgerow is beautiful all over again, as the roses give rise to lovely red hips on striking red stems.  In the fall I usually gather a few for indoor decorations. And then for several month they make a splendid naturalized planting, with their red color still apparent in January.

What Stays Green all Winter? 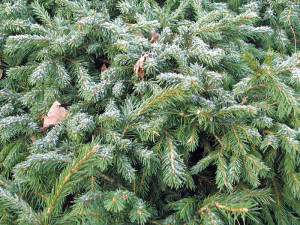 It goes without saying that evergreens are wonderful green accents to the winter garden.  And as we said earlier, smaller evergreens look especially appealing when combined with contrasting fine textured deciduous shrubs.

But do not stop at evergreens. As I have discovered, the unsung virtue of Kerria japonica ‘Picta’ is its green stems in winter. 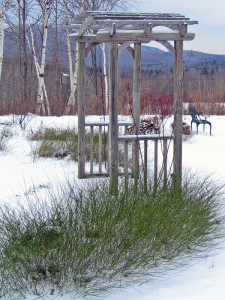 Kerria 'Picta'  is a low growing deciduous shrub (to perhaps 30 inches high).  It has sparse nondescript flowers, but wins praises for its very pretty variegated leaves. So some ten years ago I decided to plant a uniform ring of Kerria 'Picta' in the semicircular bed that surrounds our patio to accentuate the shape.

But when I planted my Kerria I never anticipates its winter persona. In the years to come I was delighted to find that, snow or no snow, Kerria's  green twiggy stems are quite a standout as they outline the shape of the patio throughout the winter.

Each spring I cut the Kerria almost to the ground in order to encourage fresh new growth. So for about one month in twelve it is inconsequential, which I consider quite a good record.

A note of caution:  Kerria 'Picta' spreads by underground stems, and it should only be planted on its own where it cannot engulf neighboring plants.  When I originally planted it around our patio I was unaware of its bad habit.  But as it turns out my positioning was fortuitous, as the plants are unable to escape either inwards or outwards from their three foot wide confines. 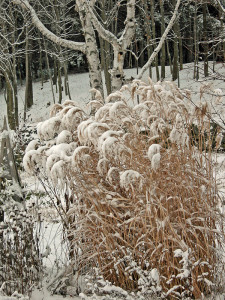 Grasses like Miscanthus bleach to a parchment color in winter

At the risk of sounding like something from a fashion magazine, I also will briefly mention the third color, parchment, which plays a part in my winter garden.  This is the color assumed by many grasses and perennials after the frost has come.  And they look quite beautiful against the snow, adding  a definite touch of sophistication and interest.

See how striking the tall stems of Miscanthus ‘Malepartus’  and Rudbeckia ‘Herbstronne’ look against a late season snow.

The Chrysanthemum ‘Mary Stoker’ which we saw on the previous page, offers a similar color, and a great contrast to the adjacent evergreens