For me the mention of ‘Spring Cleaning’ awakens early memories of my childhood in England where it was considered an essential ritual to both clean one’s house and also to tidy up one’s life.

Every April my mother would diligently take down every curtain and wash each window. Next she would launder all the curtains and hang them outside to dry. She would then carefully iron and rehang each one.

And, although I do not remember for sure, I imagine she also washed the woodwork and scrubbed the floors!

Indeed the practice of marking the arrival of spring by diligently cleaning both our homes and our places of worship is practiced in cultures and religions around the world.

This week, however, rather than cleaning my house, I feel a compelling urge to head outdoors and ready my garden for the growing season ahead.  And—needless to say—there is plenty to do!

And certainly, at these times of social distancing, not to mention the recent spate of warmer days, I am not alone.  On my drive earlier this week to pick up groceries at the Middlebury Co-op, it seemed like everyone was outside, either raking their lawns or pruning their shrubs.

So what constitutes ‘Spring Cleaning’ in the garden?

Beyond storing the tools of winter—snow shovels, roof rakes and more—up in the barn—it is a wonderful chance to get outside and catch up on some early spring chores.  Here are a few I have been doing.

It’s time to cut back those perennials and ornamental grasses

Typically I leave my perennials and ornamental grasses standing during the winter months, not only because they look lovely when highlighted by frost and snow, but also to provide valuable food and habitat for wildlife.

Just three week’s ago I watched in delight as a returning song sparrow feasted on the Gloriosa Daisies seedheads shown in this picture.

But by now the soil is soft and the birds are scratching in the mulch and leaf litter on my flowerbeds to excavate both seeds and insects.  Thus early April is an excellent time to cut back the spent stalks of all my remaining perennials and grasses and make way for the new season’s growth.

I use a wonderful Japanese curved sickle with razor-sharp teeth for much of my cutting back work.  With an 8” wooden handle and a curved 4” blade it is perfectly sized for my hand; meanwhile when not in use it fits snuggly in my tool belt.  Larger sizes are also available, so choose one that best fits your hands and your needs.

Cutting back my Big Bluestem grasses

In this first picture you can see my two clumps of Big Bluestem and some nearby perennials in early April– before I went to work one sunny afternoon. 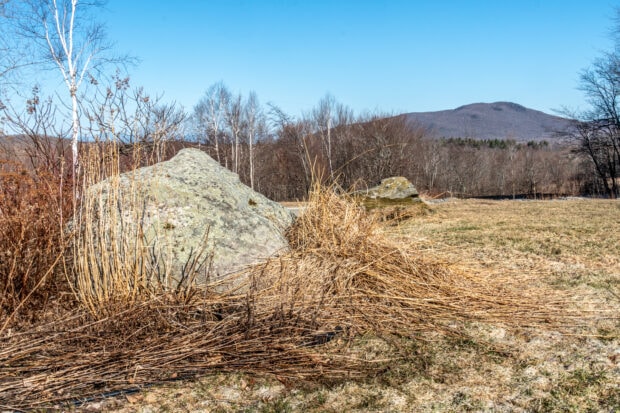 And voila:  a couple of hours later, the results of my efforts ready to deposit in the compost pile. 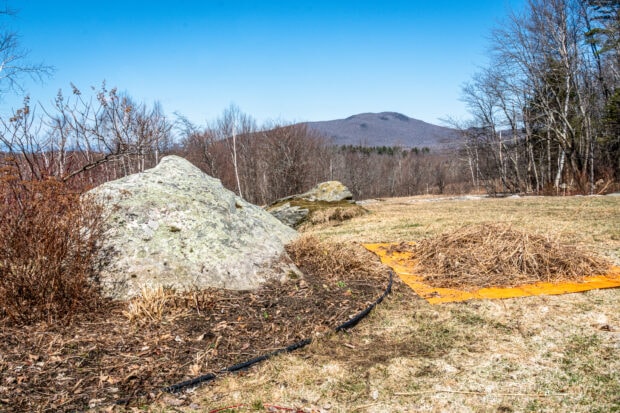 Some great ornamental grasses for our gardens

Ornamental grasses that grow as clumps are one of staples of my flower garden. (However be sure to avoid running grass species like Spartina which is often used for bank stabilization; their aggressive roots will quickly engulf a flowerbed.)

Ornamental grasses, with their linear leaves, soft colorations and delicate seedheads, create the perfect visual foil for the disc-shaped flowers of perennials like Purple Coneflowers and Black-Eyed Susans, as well as for the delicate late-season blooms of  Autumn Joy Sedums.

Also most ornamental grasses stand up well to wind and snow—adding greatly to the pleasures of the winter garden. Furthermore leaving the old leaves from last season will help protect the crown from winter damage due to alternating  freezing and thawing.

But now, in early spring, we need to cut them back so that this year’s new growth can emerge unimpeded from the crown.

Some of our well-known garden grasses make their strongest growth early in the season and then slow down in the heat of summer; thus they are known as ‘cool season grasses.  Some of my favorites include:

Since these grasses may already be putting out early spring growth you need to be gentle as you cut them back.  Sometimes I merely comb through the old growth with my fingers. Also, since they are actively growing, this is the best time of year to move or divide them.

By contrast other grasses, known as ‘warm season grasses’ wait until mid-summer to put out strong growth.  Hence you can be more assertive when cutting these back in the springtime without being concerned that you might damage the new season’s growth. But go easy and don’t cut too close to the crown. Last year’s spent leaves will help protect it from late frost damage while still allowing the new growth to make its way through.

Here are three warm season grasses, all of which hail from the prairies, that do beautifully in my Goshen garden: 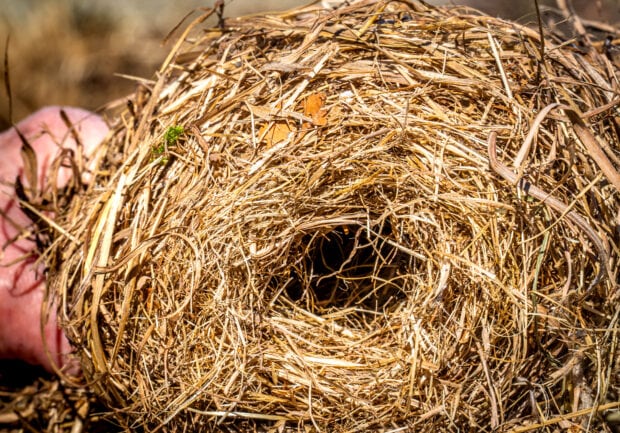 As proof of how, by deliberately leaving our gardens ‘a little bit messy’, they can contribute valuable habitat for wild creatures, take a look at this amazing mouse nest which I discovered in the middle of the largest clump of Big Bluestem.

You can see the ball of carefully shredded grass, about 6” across, enclosed a smooth spherical interior, just 2.5” in diameter. Furthermore the entire home was protected and stabilized by the surrounding coarse grass stems.

I imagined this beautiful little nest, painstakingly created by the parents, had sheltered their entire family (or maybe families?) from the wind, snow and hail of winter—one small illustration of the value of waiting until spring before cutting back my garden.

While one can do a very effective job pruning out suckers and water spouts on woody plants like crab apples and ninebark in the wintertime, there are other pruning situations where it is helpful to be guided by the emerging spring growth.

This past week, since the new buds of the season were readily visible  on my blueberry bushes, I could easily see and remove any twigs and branches that were either dead or too old to be productive. I like to do this now before the buds are enlarge, in order to avoid bumping the emerging flowers that will be soon be developing.

Also, once green leaf buds start to materialize along their brown branches, I will be cutting back my roses. Typically the top parts of rose branches die during the winter, meaning they will not produce any leaves or flowers the following summer.

So I use the emerging growth as an indicator of how far down the branch I need to make my cut. I look for a strong bud, facing in the direction I want the new growth to go, and carefully make a diagonal cut just above it.

On some shrubs, especially hydrangeas and lilacs, the buds occur in pairs, opposite each other on the stem. In this case make your cut just above a pair of buds, and then carefully remove the inward-facing bud to create a full and outward-growing shrub.

This week in the garden

It is now the second week of April and, although it is snowing again up here in Goshen, all around me the excitement of the new season is palpable. The snowdrops are blooming all across our barn slope, the first daffodils near the wall of the house are in flower, and the spring birds—juncos, song sparrows, and robins—are very much in evidence.

Then just this morning I watched a stunningly beautiful male bluebird check out one of our nesting boxes, meanwhile a kingfisher had stopped by the pond for a while, contemplating the raucous crowd of mating wood frogs.

But he did not stay long—maybe frogs-legs are less of a delicacy for a kingfisher than for some people!