It was a delightful mid-August afternoon as I sat in our gazebo, contemplating my garden.

Unsurprisingly, as I glanced around, my eye was initially drawn to the exuberant sunny borders full of colorful summer flowers— a wave of pink yarrow backed by a stand of pure-white shasta daisies; deep-blue monkshood surrounding the purple coneflowers; groups of pink and white phlox; clumps of yellow and peach-colored daylilies; and last, but certainly not least, two prodigious panicle hydrangeas completely covered with creamy cone-shaped flower-heads.

Meanwhile the blueberry bushes, laden with fruit, called out to me to get picking and the golden pools of rudbeckia whispered in my ear that autumn will soon be here.

But the garden also has gentle shady spaces.

Flourishing beneath the trees there are also several quiet spaces with soft colors and leafy textures, each radiating a feeling of tranquility and calm.

And, since each includes a place to sit, they also encourage me to slow down and relax awhile

And our gardens need both

Drawing from the ancient Chinese philosophy of yin and yang, it is the lively ‘yang’ energy which emanates from our sunny garden spaces. Here the colors are bright and, as the various flowers reach their pinnacle of perfection, the picture is ever-changing.

Meanwhile our shady spaces offer a welcome gentleness to the overall garden. The flowers are generally smaller and mostly come in springtime.   And then, throughout the season, these shady spaces are filled with lovely  leafy patterns that bring us the contemplative and reciprocal ‘yin’ energy.

And a truly harmonious garden calls for a blend of both.

In my previous article I talked about the flowers of high summer in the sunny ‘yang’ areas of my garden.

So now, as a complete contrast, let me describe three complimentary ‘yin’ areas in my garden:

The garden entrance is marked by four spreading serviceberry trees whose branches just touch, with the western two creating a natural arch  over the wide path.  Looking straight ahead, a diagonally-positioned gazebo beckons you, while off to the left you see a stunning view of the nearby Mount Moosalamoo

Every April these serviceberries have their week of glory.  Indeed they are always one of the first plants to welcome the spring.

But their contribution to the garden does not stop there. Throughout the season their beautiful canopy creates a shady home for many special plants—including a group of showy lady’s slippers and a charming low-growing Solomon’s seal with creamy-flecked leaves.

Meanwhile a low copper dish creates a point of interest as it reflects the leaves of the robust plants behind.

All shade gardens can benefit from a few carefully chosen hostas, which today  come in an amazing number of cultivars. The broad leaves of large hostas always make a delightful contrast alongside the lacy leaves of ferns and astilbes

Several handsome clumps of hosta stand out among smaller leaved plants, creating significant leafy focal points. I especially like ‘Gold Standard’ which, with its yellowish leaves, is like a patch of sunshine in the deep shade at the back of the bed.

There is also a large Hosta ’Guacamole’ that has handsome apple green leaves and dark green margins and happily takes the partial sun nearer the front of the bed.

Visitors are always drawn to the false hydrangea (Deinanthe bifida), with its expansive crinkly leaves and small white flowers.  Grown from a single plant that I purchased from a nursery about ten years ago, it now makes a truly impressive showing at the base of one of the serviceberries.

And I recently acquired another species of false hydrangea,  Deinanthe caerulea, which has soft blue and cream flowers and the same crinkly leaves, but grows only 18″ high.

Meanwhile, at the front of the bed, a lovely spreading Japanese primrose called Primula kisoana, brings bright pink flowers in springtime.  And then, throughout the season, its fuzzy scalloped leaves co-mingle with the white leaved Lamium ‘White Nancy’ and a nearly black Heuchera ‘Frosted Velvet’.

While, towards the back of the bed,  the arrow-shaped leaves of barrenwort (Epimedium rubrum) cloak any bare spots of ground.

A special place to enjoy the view

Finally at the front, but still in the shade, an elegant wooden bench completes the serene picture—while also providing us a delightful spot to sit and contemplate Mount Moosalamoo. 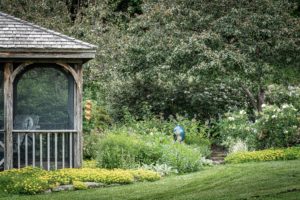 At the heart of the garden our twelve-foot square gazebo, also a favorite place to spend time on a summer’s day, nestles into one corner of large shady bed—another tranquil ‘yin’ space.

A small stepping-stone path bisects the bed, inviting you to come on in and experience the different plants ‘up-close’. A beautiful blue ceramic pot handcrafted by our friend, Robert Compton of Bristol, marks the start of the path, while a set of steps, cut into the low stone wall around the northern edge of the bed, creates the end point

About twenty years ago now, to provide both structure and shade for the inner parts of the bed, I planted a trio of delicate crab apple trees. In mid-May these small trees are covered with pink blossoms and the ground beneath is carpeted with daffodils—an exquisite sight.

And then, as with the serviceberries, throughout the season their dappled shade also creates the  perfect environment for special shrubs and perennials.

A feast for the nose

Indeed, just as the crab apple blossoms are fading, the first of my summer-flowering azaleas, Weston’s Innocence, puts forth its pure white blossoms which permeate the air with their intoxicating fragrance.
Then, one by one, four more fragrant azaleas—Jane Abbott, Parade, Golden Showers and  Lemon Drop—bloom in sequence.
And finally in mid-August, as the flowers of Lemon Drop are fading, it is time for the summersweet (Clethra alnifolia) to flower, filling the air with yet another delightful fragrance.

At the very the center of the bed you will also discover an exquisite dwarf white pine—aptly named ‘Curly’—just asking to be caressed.

There are also several clusters of perennials with lovely and varied leaves that flourish beneath the crab apples.

Right behind the gazebo a dramatic stand of umbrella plant (Darmera peltata), with huge dark green leaves atop three-foot high stems, is an exceptional presence.

And another clump of Hosta ‘Guacamole’ contrasts beautifully beside the nearly black leaves of the bugbane ‘Black Negligee’.
Meanwhile, all along the wall that forms the eastern side of the bed, there are woodland peonies, a mat-forming blue phlox and a pink-tinged Rodger’s flower all waiting to be found.

The two areas I have described so far were developed ‘from scratch’ during the twenty-five years Dick and I have lived here.

But when we arrived we were also blessed with a group of three mature sugar maples– as well as some huge rocks that were deposited by the glacier about twenty thousand years ago.

This special space was the perfect spot to create a small patio reached by a set of stone steps atop the largest rock.

As most gardeners know, mature maple trees form a mat of surface roots that makes it hard for small plants to compete.  To overcome this problem I created several small raised beds which I filled with good soil. Here I have good success with growing plenty of sturdy shade-loving plants including hostas, ferns and Solomon’s Seal.

Meanwhile , I grow special plants that need lots of water to thrive– like tuberous begonias– in beautiful containers, especially the pot you can see in the picture below, again created by our friend, Robert Compton

In this raised bed against the backdrop of the glacial rock, you can see some a Japanese Painted fern, a delicate pink astilbe and, to the left of the pot, part of a dwarf Hemlock Tsuga ‘Cole’s Prostrate’.

And finally a new bench set up against one of the rocks proved to be the finishing touch to this peaceful shady space. Even on the hottest day it is always pleasurable to retreat there and enjoy the garden from yet another angle.

We all work hard to make our gardens beautiful. So I feel it is critical that we also set aside some time to enjoy them up close and in peaceful surroundings—a time to savor not only the flowers, but also the birds and the butterflies.

It is indeed precious to spend time in a beautiful garden.

Thus you may have noticed how, for each of these areas described here, I have deliberately incorporated a special place to sit and relax.

To quote Elizabeth Lawrence, who lived in Charlotte, NC, and was both garden writer AND a real gardener:
Even if something is left undone, everyone must take time to sit still and watch the leaves turn.