The ‘dog days’ of summer are here. And often, by this point in the season, people tell me that their flowers are fading and their gardens have a bit of a tired look.

Yes, it is true that our lilacs, peonies and iris are but a distant memory, and the early salvia and catmint have gone to seed.

But there are so many lovely flowers to take their place in July and August, a time when butterflies like Monarchs and Swallowtails add that extra touch of magic to the garden.

So let me show you some of my favorite flowers for a sunny border in high summer!

Phlox come in colors ranging from pure white to magenta. However, since they also have a tendency to get the dreaded ‘powdery mildew’, be sure to seek out cultivars identified as ‘mildew resistant’ and grow them where they will get plenty of sun and good air circulation.

Two pure white phlox ‘Miss Lingard’ and ‘David’ as well as the reddish-purple ‘Rosalinde’ and ‘Robert Poore’ are among the best, and they also create a great color contrast when planted together. Miss Lingard and Rosalinde (Phlox maculata) bloom first, followed by David and Robert Poore (Phlox paniculata)).

Then, for an easy design that will return year after year, surround the phlox with several clumps of clear yellow daylilies.

Everyone loves daylilies (Hemerocallis) with hundreds of cultivars available, offering colors from creamy white, yellows and oranges, pinks and apricots, all the way to tawny reds and dark purples. Some are even fragrant.

At the Olallie Daylily Farm in Newfane, Vermont you can see firsthand an astounding number of daylily cultivars growing in their extensive fields.  And, although a few varieties (like Stella d’Oro) bloom in June, the peak bloom-time for most cultivars is July and August—making this the perfect time to pay them a visit.

Roam their fields, decide (if you can manage to narrow down your choices) on the ones that appeal to you most. Also, to extend your season, enquire about others that bloom either especially early or especially late. Then, right on the spot, a staff member will dig your new plants. Plant them as soon as you get home, and you will be rewarded with vigorous clumps that seemingly live forever.

Indeed, almost all the daylilies that grace my garden today came as a result of a long happy afternoon we spent roaming Olallie’s fields about 15 years ago. 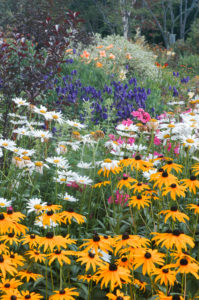 With their flat flowers and radial petals many members of the daisy family (Compositae) make great garden plants. And, as a perfect foil for either phlox or daylilies, nothing beats clumps of daisy-like flowers.

Here are some suggestions for our August gardens:

Shasta daisies (Leucanthemum superbum) have clear white petals and yellow centers, and they start blooming in earnest in July, perfectly timed to part up with daylilies and phlox. Furthermore they usually keep flowering well into September. I am particularly partial to the robust cultivar ‘Becky’ which grows to about 4′ high.

As an aside, just as the true Shasta Daisies are starting to bloom, the wild ‘Ox-Eye’ daisies (which often arrive uninvited in our borders) have run their course and are starting to set seed. So, to prevent these wildlings from self-seeding everywhere, it is a good idea to remove them 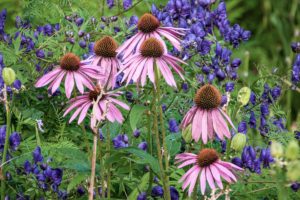 Purple cone flowers  (Echinacea purpurea) are also excellent plants for the August garden. Numerous cultivars exist today offering a range of heights and even colors beyond purple.  Look for ones like Magnus (30” to 36” high) or Kim’s Knee High (12” to 18”) which, because of their open centers, are also effective nectar sources for bees.

Two other great daisy-like perennials for the summer garden—both native—are False Sunflower (Heliopsis helianthoides) and Sneezeweed (Helenium autumnale). Their cheery yellow flowers (or sometimes orange depending on the cultivar) combine well with both daylilies and purple cone flowers.

Everyone thinks of Black-eyes Susans (Rudbeckia fulgida)  as the quintessential flower of fall. But most actually start blooming in August and continue till frost. There  is even a new cultivar, ’Early Bird Gold’, which is said to bloom from June to October.

Bring on the Blues

For a peaceful color contrast try intermingling some blue flowers among the daylilies and daisies.

So which are the best blue flowers of summer?

Rozanne is a ‘cranes-bill’ type of geranium with lavender-blue flowers that begins blooming in late June and just keeps on going until cut down by the first frost.

Rozanne it is certainly a cornerstone of my garden in both summer and fall. The plants gradually create wide spreading mounds about 18” high, so position them near the front of the border where they can spill out naturally.

There is also the lovely Siberian Catmint (Nepeta sibericia) which is taller and longer blooming than the more familiar low-growing catmint  ‘Walkers Low’ that is is a staple of our gardens in June, but by now has all but stopped flowering.

Siberian Catmint  looks stunning paired up with some yellow False Sunflower. The trick is to be diligent about cutting back the spent flowers  to a notch where you can see new flower buds are already beginning to form. Do this on a regular basis and you should have flowers well into September.

Both have deep indigo blue flowers bourse on tall tapered stems and make an excellent substitute for Delphiniums which, in my garden, always seem to succumb to high winds.

The earlier A.napellus does well in partial shade whereas the later flowering one A, ‘Spark’s Variety’ thrives in my sunny border where it makes a delightful picture weaves among the Purple Cone Flowers.

(Do remember however that both Monkshood and Delphiniums are both poisonous if ingested and can also irritate the  skin, so please avoid them if you have young children around)

And finally, for a complete contrast of both shape and color, consider putting the steel-blue prickly globe thistles (Echinops ritro) next to some soft yellow daylilies.

Ornamental garden grasses also create delightful additions to our gardens.  By August they have formed dense leafy clumps, while their tall gauzy seedheads generate a wonderful sense of movement as they dance in the wind.

These are three of my favorites:

Little Bluestem. (Schizachyrium scoparium) This prairie native has delicate bluish leaves that become tinged with pink as the season progresses, and turn almost bronze by fall.

I especially recommend the two larger cultivars ‘Blue Heaven’ and ‘Standing Ovation’ which, by the end of the season, become sizable clumps about 24″ to 30″ high.  And they look wonderful when paired with pink flowers, as in this picture of ‘Blue Heaven’ with the pink hydrangea, Invincibelle Spirit

Switchgrass (Panicum virgatum) is another lovely grass native to the prairies.  Growing to about five feet high it belongs near the back of the border.

By August you can see so many beautiful hydrangeas in gardens everywhere.

These are robust shrubs with huge creamy white flower clusters that turn dusky pink as the season progresses, and they are a stalwart in Vermont gardens.

And as an added bonus, the flowerhead remain good-looking most of the winter.  Prune them in early spring both to remove the old flowerheads as well as any winter dieback.

And, as a sure testament to their longevity,  these are the hydrangeas you see growing in many an old cemetery around the state!!

Recently plant breeders have developed many delightful new varieties for modern gardeners. Some, like Praecox and Quickfire, start booming in June.  And by mid-August ‘Pink Diamond’ on my barn slope and the larger-sized Tardiva’ in my big perennial bed look lovely behind perennials like Echinacea and Monkshood.

There are dozens of cultivars offering a range of sizes, from Bobo that grows to about 3′ high to the old-fashioned tree-form kinds that can reach 15″ or more.  So, as always, the advice is to do your own research to find a cultivar which will not outgrow the place in your garden where you are planning to plant it.

The well-know and reliable Annabelle Hydrangea, with huge rounded heads of creamy white flowers, are part of this group. These bloom on new wood and also die back to the ground each winter.  (or should be pruned back in the spring)

And, despite many new introductions, among the cream-colored ones Annabelle probably still wins the prize for robust stems and best blooms.

However this year I experimented with a relatively-new pink cultivar called ‘Invincibelle Spirit’ and so far I have been well pleased with  both the color and the long bloom time. And i love the way it looks next to a large clump of the grass,Little Bluestem ‘Blue Heaven’ as in this picture.