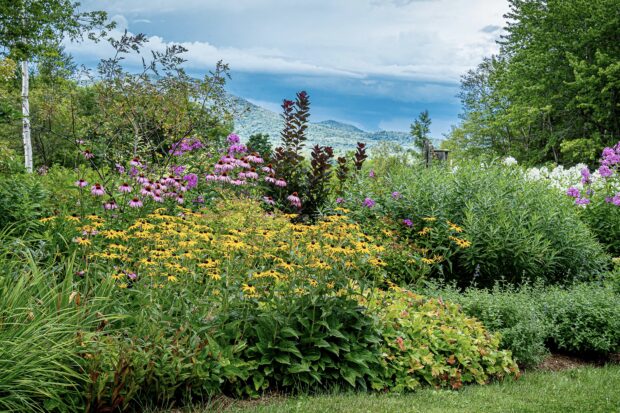 It’s hard to believe that we are entering the final chapter of the garden for this year. But there is still plenty of activity to watch and so many flowers to enjoy.

Every summer, for a scant three months, a profusion of tiny hummingbirds birds whirr around our Vermont gardens— and they never cease to amaze and amuse us humans!

But now, as a sure sign of the changing season, after a week of frenzied activity around our feeders and triggered by the ever-shortening day length, our resident humming birds have left on their momentous journeys to their wintering grounds in Central America. All of a sudden the garden seems eerily quiet.

But look a little more!  The garden still abounds with movement and activity.  Lots of little birds are flocking to the tall grasses and fading flowers to look for ripening seeds. Meanwhile the bees and butterflies still very much in evidence foraging on the last nectar-producing flowers of the season. 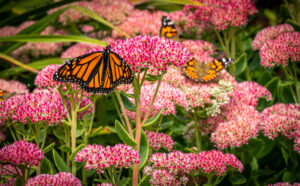 I especially love to watch the Monarchs, who will soon be setting out on their own epic journeys to winter in Mexico. The Monarchs are drawn to a number of late season flowers in the garden, especially the Autumn Joy Sedum (as in this picture), New York Ironweed and Purple Cone Flowers.

The cedar waxwings and bluebirds also like to sneak into our blueberry bushes to grab some of the remaining berries. However, since they are a bit like Rabbit (in Winnie the Pooh)—with his a tendency to invite all his ‘friends and relations’ along—much to Dick’s amusement, I shoo them away as soon as I see the bushes start to shake.

Star players to complete the season

By now the daylilies, heliopsis and other stalwarts of our summer gardens are essentially finished for the season. 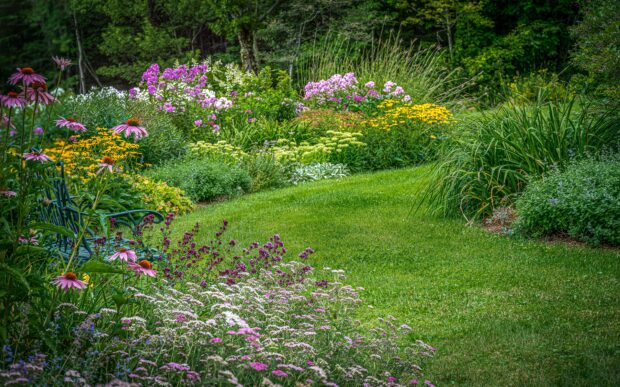 The garden in early September.

But now, as September beckons, the ornamental grasses are holding sway. (This was the subject of my previous post)  And there are still plenty of flowers in bloom, even some still to start—more than enough to keep this gardener happy.  Let me tell you about some of my favorites.

Tall phlox (Phlox paniculata) come in colors ranging from deepest red to pure white. And at this time of year they are real stand-outs in our gardens.

It has been many years since I planted my initial red and white phlox. Thus inevitably over time some amount self-sowing and cross-fertilization has occurred. Now I also have phlox in varying shades of pink and somewhat differing heights.  But the overall result is both carefree and delightful.

The most important thing to remember about growing Phlox successfully is that they require excellent air circulation and at least half a day of sun— otherwise they will become spoiled by the dreaded ‘powdery mildew’.  So, if you have had problems with phlox mildew, think about moving your plants to a more open spot before next season.  And if you plan on buying some, look for mildew resistant cultivars like ‘David’ and ‘Robert Poore’.

While my purple cone flowers, (Echinacea purpurea) have been blooming for several weeks now, they remain  lovely well into September—all the while providing a great source of nectar for both bees and butterflies.

I also have some Joe Pye weed plants—another butterfly favorite—among my perennials.  I purchased them as Little Joe (Eupatorium dubium)  which is supposed to grow to about 30” high.  However, since my plants are now almost six feet high, they were most likely the related species (Eupatorium maculatum) that we see in the meadows and along the roadsides around Vermont at this time of year. But I am not complaining!  Situated towards the back of the bed, and in front of some variegated Red Twigged dogwood (Cornus serecia ‘Ivory Halo’), they are always a great standout at the end of the season.

A different monkshood for the end of the season 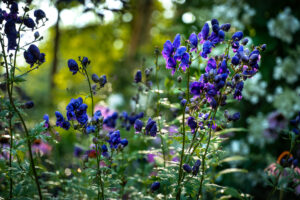 The deep blue monkshood Aconitum ‘Spark’s Variety’ blooms quite late in the season creating a wonderful color contrast to the pinks and whites of the phlox and Purple Cone Flowers.

I am also extremely fond of the delicate late-flowering monkshood (Aconitum) called Spark’s Variety that casually co-mingles amongst my phlox and coneflowers. Its midnight blue flowers offer a delightful color contrast against the varying shades of pink in the garden right now.

(But as with all monkshood, all parts of the plant are poisonous, so be sure to wear gloves when you handle it and do not plant it at all if you have children) 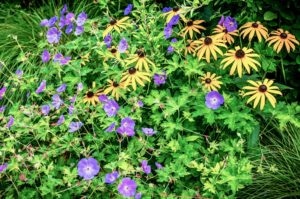 I also rely on three totally-dependable plants to create lots of late-season color at the front of the border. These are:

Woody Hydrangeas for Every Garden

No Vermont garden in fall would not be complete without one or two woody hydrangea bushes, which offer a wonderful show of creamy white flowers which gradually turn dusky pink. These are extremely long-lived plants which still flourish in many old cemeteries around Vermont. 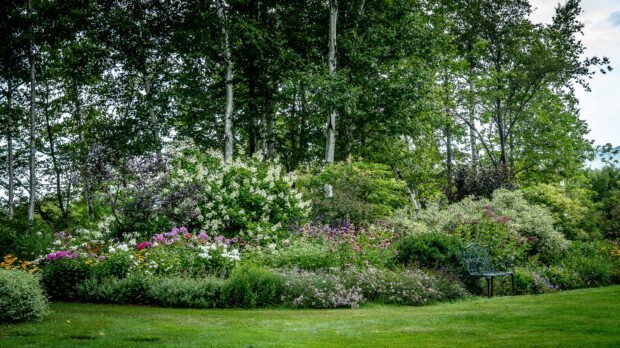 A reliable old cultivar of Hydrangea paniculata, called ‘Tardiva’ creates a wonderful end-of-season backdrop at one end of my perennial border.

Their formal name is Panicle Hydrangeas ( Hydrangea paniculata) and, unlike the typical ‘Tree Hydrangeas’ you see in the cemeteries, today’s breeders have produced an enormous range of cultivars—some with fancy names like ‘Pinky Winky’—to meet every imaginable garden need. 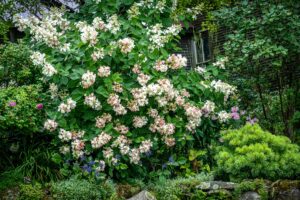 This one is called’Pink Diamond’ and as you can see, its panicles had already begun to turn pink when this picture was taken in mid-August

So rather than try to list one or two cultivars to chase down, let me provide some brief guidelines to help you choose what would work in your garden.

While most panicle hydrangeas have creamy flower heads which will eventually turn pink, in some of the newer cultivars this color change starts much earlier in the season. Indeed my Little Quick Fire bushes started to change color at the beginning of August. And there are still other cultivars like Limelight where the flowers have a pronounced greenish tinge. 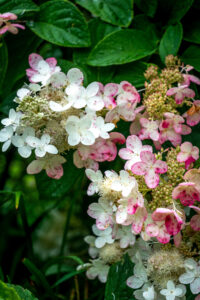 There are also several flowers still waiting for their time to bloom in my garden, not to mention several garden plants like blueberries whose colorful autumn leaves rival those of the surrounding forest.

By early September our native New England Asters will start to flower along the roadsides.  And in the garden I have several shorter cultivars  plus some hardy chrysanthemums with lovely buttery yellow flowers (Chrysanthemum ‘Mary Stoker’), all of which will be blooming shortly.

While most ‘mums’ one finds for sale at this time of year will not survive a Vermont winter, my Mary Stoker chrysanthemums have not only thrived but also expanded  in my Goshen garden over time, proving themselves to be perfectly hardy to Zone 4. Now, paired with Autumn Joy Sedum and some Geranium Rozanne’ they have become a special part of the season’s grande finale.

I have also been experimenting with the very tall New York Ironweed (Vernonia noveboracensis) a native plant with purple flowers which is adored by butterflies. Although often listed as Zone 5, so far it is doing well in my normally cold Goshen garden.

Certainly, as September rolls around and I reflect on the receding summer, I confess to feeling a tinge of sadness. But I am also busy harvesting and freezing lots of veggies, as well as contemplating the plants I want to divide and share with friends once fall has truly arrived.

And of course, there is still have another month to relish the lovely flowers and changing leaves of early fall.