The Perfect Time for Garden Projects

Since spring is nature’s time of renewal, it is hardly surprising that spring is also when most gardeners think about initiating a major garden project.

But, in reality, the best time for undertaking a substantial garden activity— such as creating a brand new garden bed or refreshing one that is badly in need of a makeover—is in October when the days are cool and the air is bug-free. A delightful time indeed to be outdoors in our gardens!

October is also when, as a direct response to the ever shortening length of days, as the leaves die back,  our perennials gradually enter a state of dormancy.  So, at this time of year, if you dig and move perennials from one place to another, there are no  green shoots to damage, and the roots will not dry out while they are out of the ground. By contrast, in springtime, it is all too easy to inadvertently damage the young tender green shoots or shrivel the roots in the hot sun.

Furthermore, in October, after most plants have dropped their leaves, we can more readily see the underlying shapes of the garden’s skeleton, making it easier to lay out a new bed or correct the shape of an existing one.

So let’s look at three activities whereby we gardeners can make the most of the delightful month of October: first by feeding the soil, then by creating a brand new bed and finally by reviving a long-standing bed that has become messy and disorderly. 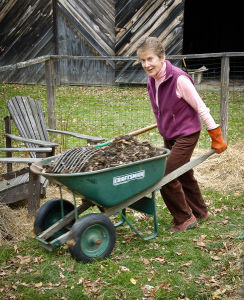 Fall is the perfect time to dismantle your existing compost cubes or piles and then sprinkle the all the matured compost across your vegetable and flower beds.  You can either leave it on the surface or very gently work it into the top few inches of soil. Gradually over time the compost will become incorporated into the structure of the soil, where it will greatly improve its physical structure—often referred to as ‘tilth’—while also contributing valuable plant nutrients.

And, once you are finished, you will have empty compost containers, ready to receive any leaves or cut perennial stems you may gather up around the garden, both now and throughout next season.

In my garden I actually go very lightly with the traditional ‘fall clean-up’,  as I prefer to leave many perennials like Rudbeckia, Echinacea, and the many ornamental grasses,  standing in the garden until springtime. I like the winter interest they give for us humans, as well the food they provide  to the birds during the coldest months of the year.

Fall is also a great time to create that new flower bed you have been planning.

First mark out the shape of the bed, using either landscape flags or a hosepipe. Check the shape from an upstairs window to make sure it is pleasing, and adjust it if necessary.

Then go to work. Using a flat garden spade or similar tool,  skim off the top few inches of grass and soil, along with the roots of any weedy perennials like dandelions, all of which can be  added to your compost pile.

Now, using a garden fork, loosen the top six to nine inches of soil and  also remove as many stones as possible.

Next spread a layer of aged compost, at least two to three inches deep, over the entire bed. Whether your existing soil consists of clay or sand, or just lacks organic matter, adding compost will improve it immeasurably. The organic matter in the compost helps to create soil with good tilth and aeration which in turn promotes strong root growth.

You can start with your own compost and then augment it with a composted manure product (such as Moo-doo), preferably in bulk rather than bagged. However be sure to avoid fresh manure as it will most likely contain viable weed seeds.

Next, to prevent lawn grasses from encroaching into the bed I like to edge all my beds; over the long run I have found this to be a significant time-saver.   Look for 5” high plastic edging in convenient 60’ rolls (Master Gardener brand is one product that I have found works well). Install it so that the beaded top is just at ground level; once the bed is mulched it will be almost invisible.

After preparing the soil, cover the whole area with a light layer of mulch. Mulch both minimizes returning weeds and it also helps to keep the soil moist.

To mulch an entire bed start by spreading several layers of newspaper over everything; newspaper will stop light from reaching the soil, thus preventing weed seeds from germinating.

By putting down mulch right away you can will hold your new bed until you are ready to plant. At that point just pull the bark mulch to one side and dig directly through the newspaper.

You can plant trees and shrubs, as well as perennials in the fall, providing you do it about six weeks before the ground freezes for winter. You can also complete the planting in the early spring, giving your new plants enough time to get established before the hot weather starts.

I do not recommend using any landscape cloth (either fabric or plastic). It prevents you from digging in the soil, such as to add compost, install a new plant or remove a weed.

Also, as it breaks down over time, all landscape cloth creates a real mess in the soil.  As the plants grow they become entangled in it, which then becomes impossible to remove. 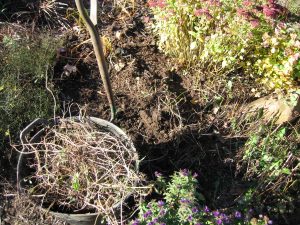 As our gardens mature and mellow, gradually our flower beds become a delightful mix of perennials that, over the years gently merge together to form a beautiful and colorful tapestry.  And, at the same time, as the desirable perennials mingle together, they start to shade the intervening spaces—and gradually crowd out the weeds!!

But what about the reverse nightmare situation where the weeds start to win out—resulting in an unsightly tangled mess that—little by little— begins to engulf our beloved perennials.

Fall is the perfect time to tackle this problem.  After their leaves have died back for the season you can dig up all your existing  perennials without harming them.  If you want you can also divide their roots to create more plants, and then place everything in a plastic bag until you are ready for replanting. 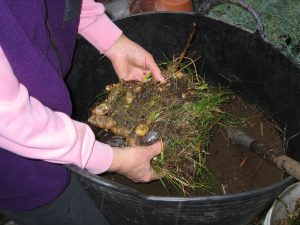 And suppose you discover that the roots of grasses and other weeds are intertwined among the roots of the perennials you have dug? Just soak the entire root mass in a large container of water for a couple of hours, after which you will be able to easily disentangle the weedy roots from the roots of your plants.

Next you need to thoroughly dig through your entire bed to remove all the remaining weeds, carefully working around the roots of the existing woody shrubs as you go.

Then, once you are convinced the bed is weed-free, refresh the soil with compost and then replant all your perennial roots. 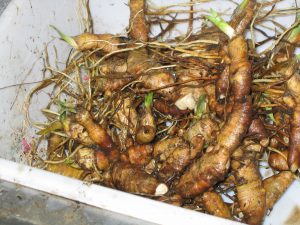 You may even  find you have some to share with friends!! 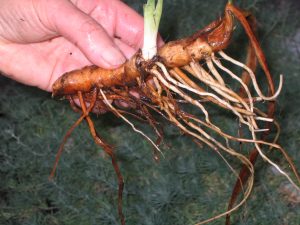