Creating a garden is akin to taking a journey. An adventure which, at the outset, we don’t quite know where it will lead.

Gardens are also living creations, first conceived and then lovingly nurtured by their owners over the years.  And, like all living creations, our gardens evolve over time, gradually passing through various life-stages—from young, to middle-aged and finally reaching that glorious maturity we dreamed about when we began our journey.

If you are developing a new garden from scratch—or even continuing one that someone else has started —it is incredibly helpful to make a scale drawing that shows your long-term vision and which will act as your guide.

But, to avoid getting overwhelmed in the early years, it is always wise to implement your garden gradually!

To provide both structure and shade in the future garden, you will probably want to include both trees and shrubs in your plan. Be sure to check the mature size of all the woody plants you choose, as many will eventually grow quite large. Then draw them on your plan at the size each will be when it is fully grown so that you can position them with sufficient space for their branches to fill out as they mature.

Also, since it can be many years before any woody plant reaches its full size, it makes sense to select and plant most of your trees and shrubs early on.

Similarly, as you plant out each new bed,  the young perennials are also quite small.  But, knowing they also need room to spread out as they develop, space them 18” or more apart from one another.

Thus, in their early years, our gardens all have a somewhat sparse and underwhelming feel.

This is when the gardener needs to exercise patience, knowing that, if the weeds are kept at bay and the desirable plants nurtured and watered, they will gradually grow and mature.

In these early years it also helps to mulch between the plants, both to combat the weeds and also to preserve precious moisture during the heat of summer.

And all this results in that ‘young garden look’—when the beds seem to be more brown than the delightful mixture of green leaves and colorful flowers you were anticipating.

But little by little, our gardens reach what we might call the ‘Middle Years’.  Shrubs and smaller trees, like crab apples and serviceberries, are gradually expanding to reach their ‘full size’— the dimensions you may have seen on the nursery tag back when you originally planted them.

And the perennials are already filling in and hiding the soil, thus reducing the need for lots of new mulch each spring.

Some perennials, like daylilies and hostas,  shade the soil with their wide leaves. Others—such as black-eyed Susans and purple cone flowers— gradually expand and also create new plants by self-seeding.

Meanwhile true ground-covering plants such as Epimedium and Big-root Geranium expand by putting out side roots, thus increasing their diameter to hide the bare ground.

And eventually our gardens reach a beautiful state of maturity.

As the trees approach full size, they create visual anchor points in the garden while also casting circles of shade on the ground—beneath which plants like ferns and hostas can now flourish.

And the shrubs you planted as a nice backdrop for your border are now are taller than the perennials in front—just the way you imagined when you started!

The story of our garden

When we first moved to our mountain home in Goshen, Vermont, over 25 years ago now, the space that would become our garden was an unkempt meadow some 200 feet long and 100 feet wide terminating in a small pond.

Immediately I began to envision our ‘garden-of-a-lifetime’, drawing up a plan, on paper and to scale, showing the position and shapes of the beds, together with the trees and shrubs which would anchor everything together.  I also included a circular patio and a square gazebo, carefully set on an axis at 45° to the house. 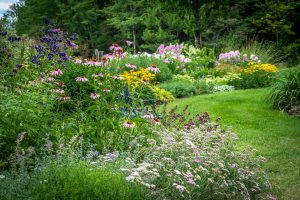 Then I planted four serviceberries to frame the garden entrance and a trio of crab apples behind the gazebo, and gradually added the beds in the plan for the various shrubs and perennials.

Since the plants were all spaced so that they would grow together as they matured, during the early years I had to contend with the somewhat sterile ‘new garden’ look.

But, without a doubt, my efforts have been rewarded. The crab apples and serviceberries create wonderful shady spaces where large leaved plants like hostas and false hydrangeas flourish, as they create a stunning contrast against the delicate leaves of ferns and astilbes.

Meanwhile, in the expansive sunny borders a mix of shrubs with contrasting leaves (like the dark-leaved ninebark ‘Diablo’ against some variegated red-twigged dogwood, Ivory Halo), create a stunning backdrop for the parade of colorful perennial flowers that come and go as the summer progresses.

About ten years ago I decided to remake our front garden. Until then it had consisted of two ancient maples and a difficult-to-mow slope down to the road.

But, since the trees had become unsafe, we decided it was time to have them removed and the stumps ground down below ground level.

Then, to eliminate the slope, Tammy Walsh, my Goshen stone-mason friend, built a beautiful retaining wall edged by a set of steps, resulting in a good-sized flat space for a new garden bed. 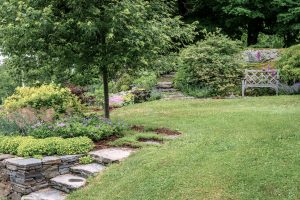 I began by planting a new Freeman maple, Sienna Glen, as the visual anchor for the entire space, together with shrubs like Lemon Candy Ninebark and a Panicle Hydrangea which will take the sun now but, as the canopy on the maple fills in, will also be happy in the resulting partial shade.

I then filled in the intervening spaces with a mix of colorful perennials. I am mindful that some of these may need to be moved as the canopy of the maple enlarges, at which time I will introduce some shade-loving perennials like hostas.

The picture here shows our resulting front garden which, while still in its ‘Middle Years’,  is already a true pleasure for us— as well as for the people who pass along our quiet dirt road.